Over the last two weeks, I've had a chance to read through these two rulebooks: 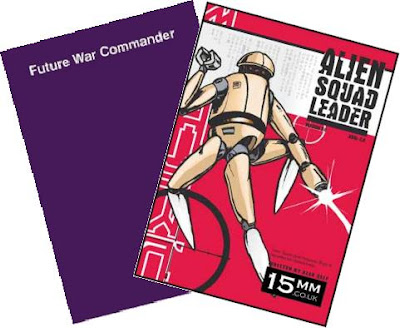 Alien Squad Leader arrived with my Law Officers from 15mm.co.uk, and Future War Commander (Lulu edition) was a Christmas gift from my fiance. Both games are heavily inspired by GW's Warmaster, at least in terms of command and control. But that is pretty much where the similarities end - these appear to be two very different games.

Future War Commander, at least after its initial read, looks extremely promising as a game. It definitely shows its Blitzkreig Commander roots, but adds just enough sci-fi elements to make it stand on its own. I'll go through it section by section:

Main Rules
The first 40 pages or so explain the rules in great detail. But the game itself is NOT extraordinarily complicated - it just has a fair amount of "chrome" to the main rules. For basic company-vs-company, you really won't be using more than a handful of these pages for command, movement, shooting, and saving. The rest of the rules deal with specialist abilities and weapons such as recon units, air superiority, snipers, smart missles, orbital bombardments, and the use of gunships and dropships. The best part about the rules, at least to me, is that you should be able to play an entire game using only a two-sided quick reference sheet. The game mechanics are around simple rolls with basic modifiers. There aren't numerous pages of tables, nor will playing a game of FWC feel like a math assignment.

Fighting Battles
This section covers table setup, objectives, and provides eleven scenarios. FWC includes one mechanic that I really like - variable force sizes. This means that you and your opponent may have agreed to a 1000-point battle, but that doesn't guarantee you will each have 1000 points on the table. It looks like each army's objective can be achieved even with a lopsided battle, and I can't wait to try it out.

Army Lists
72 pages of the book are dedicated to unit stats. These cover 6mm-15mm models from Dark Realm, Exodus Wars, Ground Zero, Games Workshop, and many other companies. Even if your specific units haven't been listed, it usually isn't difficult to find an equivalent unit from another manufacturer that you could use. And if that isn't sufficient, FWC includes a very simple unit creation formula. And unlike many games I've played - this formula is what was actually used to create the forces outlined in the rulebook.

FWC Skirmish
This section explains how to use the core game mechanics to fight skirmish-scale battles. I've read through it, but I think I'll really have to play it to see how well it works. It appears to be a detail level roughly equivalent to Rogue Trader, so a platoon with a few vehicles is about all you would want to use.

I hope to play a demo game very soon using these rules. Even if I'm not able to get any 15mm forces ready, I can at least use my existing Epic armies to test the rules.