Okay, folks, I'm back from my little hiatus.  Sorry for the absence.. I was overseas for some military training and I don't like announcing what I'm doing or where I'm going until after I'm back. :)

I returned home to find a large order of Old Crow grav vehicles waiting for me, and some fantastic weather to get them assembled and spray them with some primer.  And then I found that I had a major choice to make, so I will now share it with you!

This was the test tank I painted a few months ago.  It matched my Conquest Development Center Stormtroopers (Rebel Minis Titan Marines) color scheme, and I was pretty pleased with it.  So I continued the paint scheme onto my new vehicles.  Here is an Outrider scout vehicle, which I'm going to use as a four-man transport for sniper and command teams.

The former Space Marine player in me has no problem fielding an army like this.  But something still feels missing, especially after ogling Jeff Racel's galleries and the Hammer's Slammers Crucible website the past few weeks.  While I was away I came up with a possible camo scheme for this army.  I don't want to use camo on the infantry, but I thought it might work on the tanks and APCs... 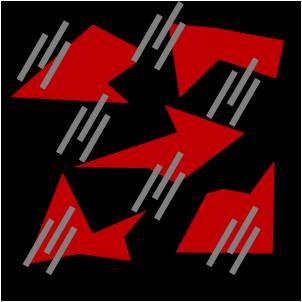 So after finishing the solid-colored Outrider, I decided to give the second one a full camo treatment.  Here's the result: 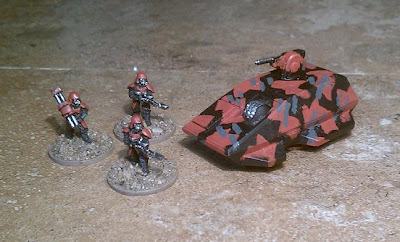 And a comparison of the two:

I think I'm going to keep going with the camo scheme.  What do you guys think?