A quick weekend update: Craig Cartmel has updated the FUBAR section of his website, posting most of the force supplements we generated at the Yahoo group.

Link: http://thegamesshed.wordpress.com/2010/06/17/fubar-one-page-sfmodern-rules/
For those of you who aren't familiar with FUBAR - they are a one-page set of rules from the genius who gave us the Forge Of War game system.  They are an extremely clever system that encourages you to get to the battlefield right away, rather than spending hours and hours perfecting your army list or bickering over interpretations of vague special rules.  They are absolutely perfect for a pickup game... just toss down two roughly-similar forces, come up with some basic victory conditions, and play the game!
Here's a link to my original review: http://basementgamingbunker.blogspot.com/2010/09/more-fun-rules-part-1-fubar.html    And a 15mm battle report: http://basementgamingbunker.blogspot.com/2010/09/fubar-battle-report-clear-desert.html
This game is endlessly modifiable using the core mechanics.  On this page you will find a variant that I knocked together to play Space Hulk/Doom: The Boardgame style battles: http://basementgamingbunker.blogspot.com/p/fubar-resources.html
If you haven't given these a chance yet - just try them!  You might be amazed how enjoyable it is to play a game like this.
Chris
Posted by Basement Gaming Bunker at 5:52 PM 3 comments:

This week's Snowpocalypse left me unable to leave my home today.  While most of my day was spent removing 30" of snow from my driveway, I did manage to assemble a few of my new Ground Zero Games light tracked vehicles (all found on this page).  I assembled four tanks, a command APC, and two tank destroyers.  They went together pretty quickly, though the tanks and destroyers need just a bit of filing on the sides to fit the tracks to the bodies.

Once I had them together, I decided it was time to finally decide what infantry I would match them to.  I had narrowed it down to two options: Rebel Minis Earthforce (which represent the United Star Alliance military in my Conquest System universe), or Micropanzer SAS (the corporate security forces of the Aurora Group).  I went with the Aurora Group (Micropanzer), but realized something.  The barrels on the light tank (see here) and the destroyer (see here) are very conventional round tubes.  The Micropanzer infantry have fantastically sculpted weapons, but they all have a rectangular cross-section.  I wanted to do convert the vehicle weapons somehow to tie them together.  After a few odd thoughts of sculpting my own from plastic rectangle stock I had an interesting idea... and soon I was digging through my Warhammer 40k cabinet looking for some sprues of Tau Fire Warriors that I acquired years ago in an eBay lot.  I clipped off a Tau Pulse Carbine, filed it down a bit, and here is the result: 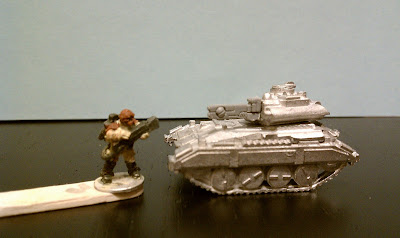 This was exactly the look I wanted!  After quickly converting the other three light tanks, I decided I should make one stand out as a command vehicle.  Looking through my other bits, I grabbed one of the GZG turret bodies and fashioned a cupola weapon from a spare Khurasan power armor gun.  It's just a bit on the large side, but again, it's a pretty darn good match: 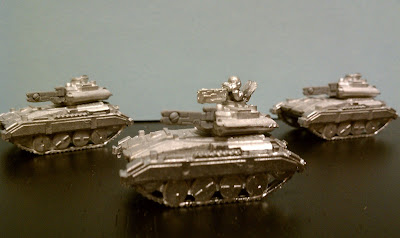 I added another one of the Khurasan guns to the Chariot (which is otherwise unarmed). 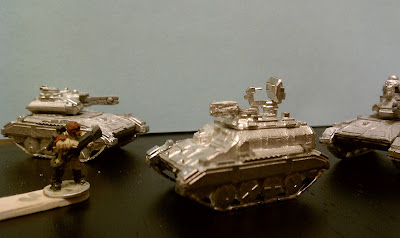 Then I moved on to the tank destroyers.  This time I used two of the longer Pulse Rifles instead of the carbines, which I think worked extremely well. 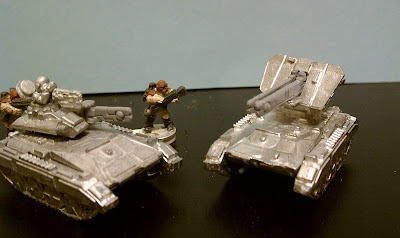 However, I wasn't 100% sold on the gun shield.  When I converted the second destroyer I removed the gunshield and added another bit off the Tau frame.  Still haven't decided which I prefer, so readers, I'll leave this one up to you! 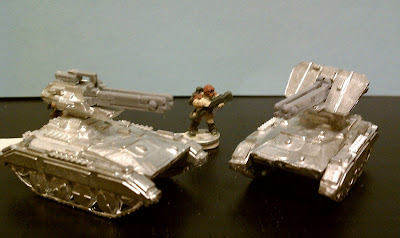 What did I learn from all of this?  One of the only things I've missed about Warhammer 40k since my switch to 15mm Sci-Fi is the ease of customizing the minis.  Now that I've done infantry headswaps and vehicle conversions there is no part of me that believes 15mm is limited to off-the-shelf designs. 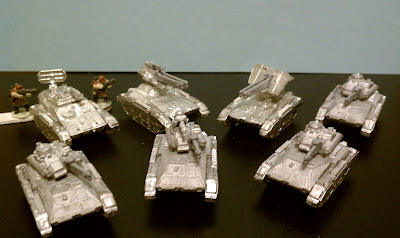 Please give me your thoughts on the tank destroyer - gunshield or no gunshield?  I have two more to build!

This action took place at an old Conquest Development Corporation forward operating base on Copper Moon.  In the decade since it had been abandoned, Gorker scum led by Boss Grimskab had squatted into it, and built up their own shanties around it.  Intelligence reports indicated that Grimskab has been suppyling weapons to numerous smaller Gorker bands, other lowlife alien tribes, and even some radical human gangs.
CDC dispatched an enhanced Stormtrooper armored platoon to capture or destroy the weapons.  Unwilling to risk sending the heavy tanks into the booby traps and IEDS surrounding the Gorker settlement, Lieutenant Blackwood sent Corporal King’s fireteam into the FOB ahead of the main assault.  King’s mission was to kill Grimskab and his warband, neutralize any traps, and clear the way for the heavy vehicles.  King’s fireteam was dropped a safe distance away and entered the FOB by foot.


THE GAME
The game is a slightly modified version of Mission 1 from the Gut Check rules pack.  I also used this as a chance to try out Spacejacker's new Tablet Friendly quick reference sheet. As with my playtest game, I simply replaced “hex” references with 2” of actual measurement.  I kept getting mixed up on when I was supposed to move enemy models instead of blips last game, so this time I decided to give the blips their own phase after all on-table models had been resolved.  I placed six blips for this game. 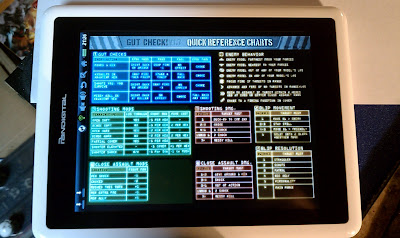 Turn One - Corporal King and Stormtrooper Wolf successfully activated and Evaded toward the closest blip.  Stormtroopers Lee, Jones, and Curt failed their activations.  The nearest Gorker blip was revealed - it was Boss Grimskab himself, along his four ugliest and smelliest Boyz. 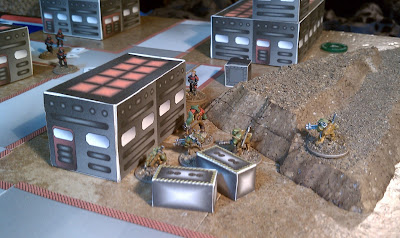 Turn Two - CDC won initiative.  King and Wolf were joined by Jones and Lee, and all engaged Grimskab and his Boyz.  Curt failed another activation, deciding to adjust his bootlaces rather than provide fire support to his team.  The Stormtroopers opened fire on the Gorkers.  Grimskab was Shocked, one Boy taken out of action.  Grimskab retaliated by charging Corporal King, scoring a Messy Kill against him. 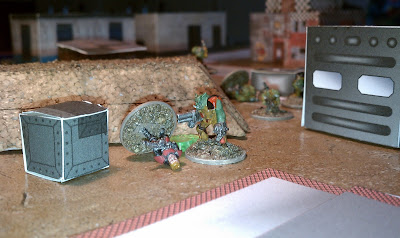 Troopers Jones, Wolf, and Lee failed their Gut Checks and fled off into cover.  However, the charging Boss counted as movement in front of the Trooper Curt, who finally did something.  The barrage from his snap-fire chased Grimskab into cover, separating him from his Boyz. 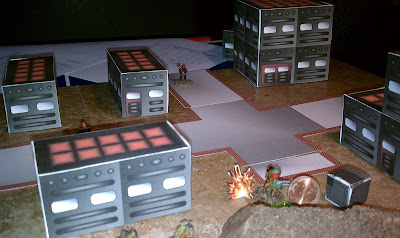 A second blip was revealed to be nothing more than a false alarm.


Turn Three - CDC Initiative.  Troopers Jones, Wolf, and Lee rushed around the bunker and opened fire on the Gorkers from behind, killing 1 and wounding a second.  Trooper Curt fired another missile at Boss Grimskab, causing what appeared to be serious wounds.  However, Grimskab is a remarkably tough old Gorker, and he recovered both of his shock counters in that recovery phase. 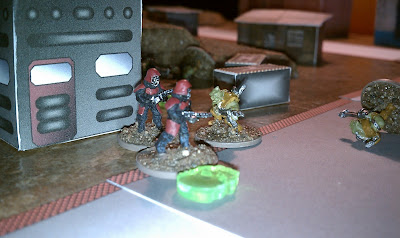 Turn Four - Gorker Initiative.  One of the Boyz charged at the Stormtroopers, wounding Lee.  That Gorker Boy died from the return snap-fire.  A second Gorker charged in, wounding Wolf..  Grimskab shot at Wolf, missing him.  Wolf’s return snap-fire wounded the Boss yet again.  Stormtrooper Curt again fired on the Boss, finally killing him.  A third blip was revealed, and three more Boyz approached from the shanties.

Turn Five - Gorker Initiative, but the first Boy failed his activation.  The Stormtroopers continued firing on the Boyz behind the first bunker.  One was killed, another fled into cover.  The missile trooper Curt finally caught up with his fireteam (using an Evade move).  Several Boyz opened fire, taking Lee completely out of action.  A fourth blip revealed three more Gorkers.


Turn Six - CDC initiative.  His other boot coming untied, Curt failed to activate.  His teammates focused their fire behind the bunker, killing the final Gorker from the very first blip.  Most of the other Gorkers failed their activation rolls.  One managed to evade into a cover position near the CDC fireteam.  The rest that did activate and fire failed to hit their targets.  The fifth blip was revealed to be a false alarm. 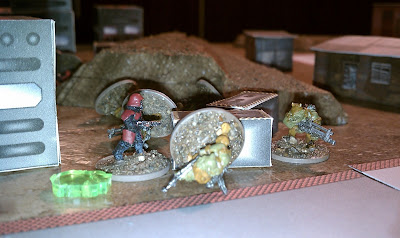 Turn Seven - Gorker initiative, but again, the first boy failed to activate.  Stormtrooper Wolf focused his fire on the Gorker Boy in cover, shocking him.  Two Boyz charged into close combat.  Stormtrooper Jones choked in the face of the assault, but Wolf and Curt both snap-fired, killing the charging Gorkers.  Curt then passed his own activation (I know, I was surprised as well!), focused his fire on two Gorkers near the shanties, scoring messy kills on both.  The final blip revealed three more Gorker Boyz. 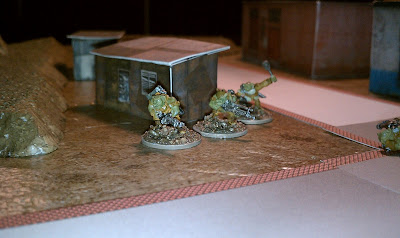 Turn Eight - Gorker initiative.  The wounded Boy in cover focused his fire on Stormtrooper Wolf, but missed him completely.  Wolf snap-fired in response, taking the Gorker out of action.  Stormtrooper Jones exchanged fire with two Boyz, shocking one.  Stormtrooper Curt’s missile launcher finished the shocked Boy and causing one shocked result on another.

Turn Nine - CDC initiative.  Stormtrooper Curt fired again, killing 1 Gorker and wounding the last one.  That last Boy evaded into cover on his own activation.  The snap-fire from Stormtrooper Jones (responding to that movement) rolled nothing but 6s to hit and wound, ending the game. 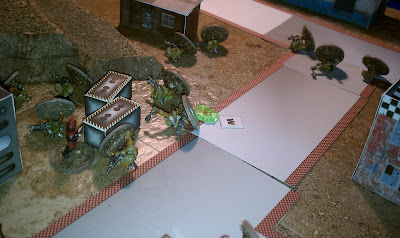 Aftermath
Thirteen Boyz and a Boss Grimskar killed, while the Corporal King was slaughtered and Stormtrooper Lee was left in critical condition.  Stormtrooper Wolf signalled Lieutenant Blackwood back at the platoon HQ, informing him that the FOB was cleared.  Wolf continued to provide emergency treatment to Lee while Jones and Curt began to systematically clear the FOB of anti-tank IEDs and search for the weapon stores.
Posted by Basement Gaming Bunker at 2:51 PM 2 comments: