Christmas at the Bunker

I was lucky enough to get a few hobby-related goodies for Christmas this year.  My wife, a sci-horror writer and Giger fan, ordered a few reinforcements to my Khurasan Space Demon forces.  She also bought me a pack each Sepulvedan Control Battalion Riflethings and Heavy Weaponsthings - which I've been wanting to paint ever since I saw them.

Santa also brought us an IKEA gift card.   We picked up a bunch of small things for the house, including a couple of these JANSJO Clamp Spotlights.

I've been having major problems taking detailed pictures of my minis.  For some reason my digital camera (by which I mean my HTC Incredible smartphone) has a hard time balancing a white background under CFL bulbs.  But for some reason, it seems to do well with the LEDs in the new lamps: 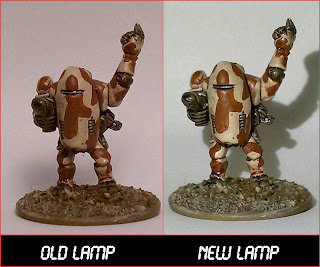 That's the same piece of bright white cardstock in the background, so this is definitely an improvement.  I was planning to spend most of my vacation time this week getting my Christmas War campaign started (especially since I hammered out my campaign background).  But now that I have these new lamps, I may also take some time to update my close-up gallery.

Did anyone else get any hobby-related goodness this year?

I had all kinds of plans to start working on my Critical Mass Games Kaamados Dominion figures this week.  But, of course, I was one paint color short.  In the meantime, I decided it was a good time to paint my Khurasan Miniatures Vacation Aliens.

It only took a few hours to do both.  They definitely look better in the flesh... I tried a dozen camera settings and this was the best that came out.  The paint scheme:


Now I need to figure out exactly how to use these in my own settings.  I've never been a fan of replaying scenarios from movies or shows.  Instead, I think these will be some type of bounty hunting team, or possibly master-race enslavers for something like GZG Crusties.

Reinforcements for the Cult of the Crimson Robe

Sorry about the hiatus here, folks... sometimes I neglect this blog when I'm writing for Dropship Horizon.  :)  Still, I've managed to work on a few of my own forces.  I painted these 15mm.Co.Uk HOF Cultists back in October. 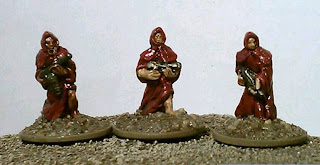 These were pretty much demo pieces when I painted them.  I wanted to see how they would look alongside this Kremlin Miniatures Commander Vortan figure.

I had originally painted Vortan to use in a 15mm Inquisitorial Retinue for In the Emperor's Name... this was a way to get some additional mileage out of the same figure.  Obviously the figures work great together, as the basis for some kind of fanatical cult force.  Also, 15mm.Co.Uk added some heavy weapon figures to their Cultists range.  There was no longer any doubt in my mind that this cult could become a full army.

I still had seven Cultists from my first pack.  I painted four more of them this week. Bear with me on the pictures - I'm trying out a new photo box and haven't worked out all the kinks.

These figures are nice and quick to paint.  I'll have to pick up another pack of the troopers, a pack of heavy weapons, and then I should be good to go for cult infantry.  But what about vehicles?  I don't have much left unused in my collection outside of a couple of Old Crow Gecko pickups and a Goanna transport.  The Gecko would be a great technical truck... I even have some GZG freestanding autocannons to mount in the back of the truck.

And the gunner?  Well, there's a reason I didn't paint those last three Cultist troopers.  Inspired by Matt's conversion article on Dropship Horizon, I'm going to try to turn a couple of these Cultist troopers into standing gunners.  It should be as simple as cutting and filing out the arms and gun, filing down the thick cast base on the figure, and making a couple of new arms out of grey stuff.  I don't have much experience with sculpting putty, and this looks like a very forgiving project to get my feet wet.

On the other hand... is this the direction I want to take my cultists?  The end result would be pretty similar to the Desert Radicals that I've already been playing with.

And, because wealth seems to flow to people of questionable sanity, many of the fanatical cults we see in the real world have pretty substantial funding.  Maybe something along the lines of the Combat Wombat Pitbull, GZG Bulldog, or the Khurasan Atlas would better serve this cult.  Either way, I now have enough figures to run them in a small game of ItEN or Blasters & Bulkheads.  I'll figure out the vehicles after I finish some more infantry.