The Cure for Burnout - Funky Old Aliens on Dinosaurs!

Planning ahead just isn't my style.

I was on a major roll in January and February.  Painted tons and tons of figures, played a couple of really fun solo games/mini campaigns... figured this would be a great year for me!  So I tried to take it a step further in March... not only would I keep to my goal of "one painted combat unit per week," but I tried to plan which units I'd paint and buy this month.  Yeah, didn't work... I lost interest in those forces.

So, after some fairly uneventful evenings (seriously... two Micropanzer gun drones are a pitiful tally for three nights' painting), I decided to throw out the schedule.  In fact, I ignored every army in my force and every bit of universe development in my notes.  When in doubt - do something completely different.  So, digging through the lead pile, here's what I found: 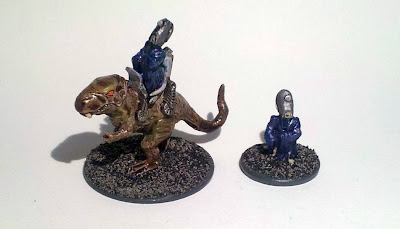 These are Orts from the old Asgard range (now sold by 15mm.Co.Uk).  Whenever I order from 15mm.Co.Uk, I make it a point to grab something completely random and different along with my "planned" figures.  No plans for them, no idea how to game with them... just paint them and see what happens.  But it brought my mojo back!  Two short evenings painting yielded a complete skirmish force.

As with most old ranges - they're great poses and castings, but are a bit lacking in variety . So... what to do with these weird little guys?  The large (and protected) craniums and robes seem to imply an advanced, possibly psychic, race with limited numbers.  It's a fun contrast with the dinosaur mounts.  I'm thinking they would work as the command teams for a horde of primitives.

After poking around a few 15mm fantasy ranges, I found these Eureka Man-Orcs with Crossbows.

The helmet has the same general shape, and now they kinda remind me of the Mouth Of Sauron from Peter Jackson's Return Of The King.  And the crossbows could easily be modified into some type of arquebus or musket, or even a simple blaster rifle.

Now it's time to develop their story.  I wonder if these can be worked into an existing storyline, or if I'll just come up with something new for them?

Here's another one of those models that has been around for quite some time, but doesn't seem to get the attention it deserves.

I picked up a Brigade Models Athena VTOL during their December sale.  It's nice to see this model is available again - it had been unavailable for some time (probably because the thin parts are quite difficult to cast).  But I'm glad Brigade decided to return it to the lineup, because it is my new favorite 15mm dropship/transport craft.

The main kit consists of 8 parts: the main fuselage, the main wing, two thrusters, tailpiece, rear hatch, and 3x landing struts.  The parts were cast very cleanly.  No air bubbles on anything, just a little bit of mold lines along the edges of the main wing section.  And there was some slight warpage with one of the vertical tail fins, but it easily bent back to shape under hot water.  I also ordered two different weapon kits: the rocket and gun pods. Since I couldn't choose between the two, I decided to add one of each to my Athena.

This is the largest 15mm aerospace vehicle in my collection.  I decided to use the landing gear because, on my 2' x 2' tabletops, the Athena won't be anything more than terrain or an objective.  If this was to be a game piece on a much larger table, I wouldn't use anything outside of a CorSec Engineering Omni-Stand to safely hold it. Even though the big parts are resin, this is still a very heavy model.

Assembly and painting were a breeze.  Everything went together with superglue, and it took spray primer without any problems.  Then I sprayed the entire ship with Model Master Euro Gray and used the same color in brush-on to touch up a few missed spots.  I painted the engine components and windows with Vallejo Boltgun, then washed with a coat of Secret Weapon Armor Wash and Secret Weapon Blue Wash respectively.  Then I picked out a few other details in Vallejo Heavy Bluegray, painted the weapons with Vallejo Heavy Brown, and finished and sealed the mini with Wonder Wash Black. 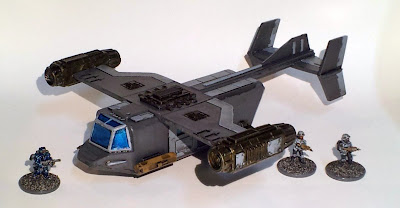 The palette is identical to my Rebel Minis Homeguard (including the Rebel HAMR suits I painted to support them), and a close match for my Laserburn Imperial Scouts.  This, of course, was deliberate.  But it also became apparent that this color scheme was nice and generic - it could work alongside any human force in my collection: 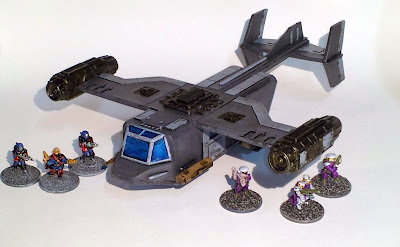 So now I have a good transport ship/shuttle to use in all kinds of games.  I tested it out using the USE ME  Terminus: Planetfall scenario on Barking Irons.  I'll post that battle report soon on Dropship Horizon.

In addition to his great range of 15mm figures, Jason over at Micropanzer Wargame Studio has been selling painted buildings made from plastic electrical boxes.  You can see what's available on this page.  I had my eye on his first few sets, but none of them really "jumped" out at me.  On his next update, I saw a set of four buildings painted in a dark red color. 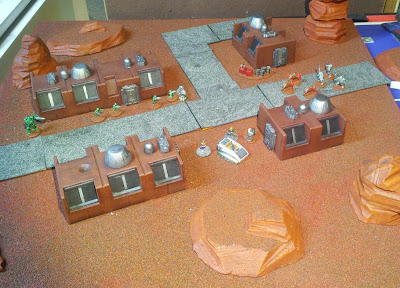 I couldn't resist!  I thought they'd look great on my Red Planet terrain table, and this set didn't disappoint me.  These single-story buildings look like part of an established colony - these are permanent structures rather than early shanties or pre-fabs, but they haven't developed into a complete city just yet.  So they are perfect settlements for disputed territories on colonized worlds, or even for a bustling small-skirmish spaceport or lab complex. 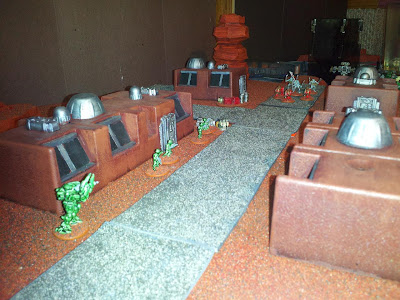 And, just for the sake of curiosity, I wondered how these would look on my other gaming tables.  They didn't offer much for my desert table (especially since I have a full set of The Scene desert buildings), but they are very nice with my snow terrain. 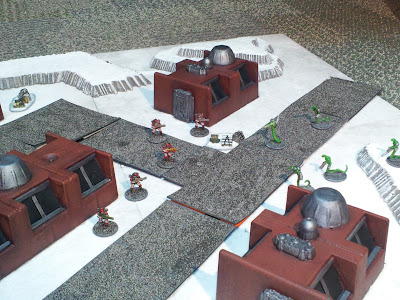 The snow terrain hasn't seen much play, simply because I never managed to finish painting my Critical Mass Games ARC Fleet refinery set.  These will get me by for now.  I may even buy some of his gray-colored buildings for the snow table, or just to add some variety to the settlement.

February Wrap-Up and Looking Ahead

Another successful month at the Bunker!  My stated goal for the year has been "one combat unit painted every week."  I exceeded the goal in January, and had no problem meeting it in February.  And I managed to finish a few new terrain projects, just to help move things along. 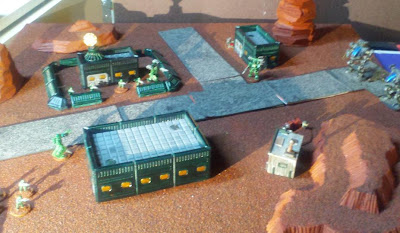 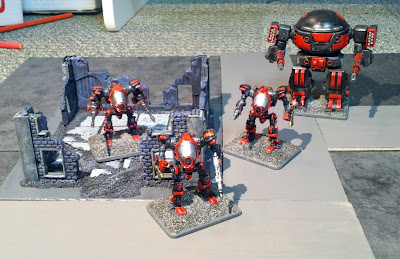 Here's my tentative painting agenda for March:
And the high priority items on my shopping and wish list:
Cheers,
Chris
Posted by Chris K. at 1:27 PM 4 comments:

The Cautionary Tale of the Heavy Black Wash

I painted my first three Rebel Minis VIPER Mecha this past week.  Well, almost.  Sometimes I'm quite successful when I try new paint techniques.  Other times the results are disastrous.  This was one of those times.

The VIPERS were purchased to support my existing Rebel Drop Troopers and CAT 'Bots.  Those were painted with the famous green-wash-over-bare-metal technique, producing a metallic green finish:

The plan for the VIPERs was to use the same technique.  But Rebel Mike did something I wasn't anticipating - he released them in resin!  On the plus side, the VIPERs are the least expensive 1/100 mecha available, and come with a huge variety of really nice weapons.  On the down side - I needed to find a way to match these resin mecha to my existing figures.

I've had some luck using wash over metallic silver paint (like these GZG Cyclops Suits).  It produces roughly the same effect as bare metal - maybe a little cleaner in appearance.  But the VIPERs are larger minis.  Would that same technique work?  I've had zero luck using that same technique on larger models like terrain pieces.  So, a trip to the friendly local hobby store was in order.

My four-year-old actually found it before I did - Model Master Dark Green Pearl.  It looked just fine in the bottle, but that's never a good indication.  So I tried a little bit on one corner of a VIPER suit.  It was pretty transparent.  I ended up putting two coats over the whole thing, then started picking out the other details with the same Vallejo Heavy Bluegray and Gold paints as the infantry.  It still didn't look right to me.  So, instead of the nice and thin Wonder Wash that I used on the infantry, I tried to use Secret Weapon Heavy Black Wash.

The Secret Weapon wash was far too heavy for this application.  The green finish was bad, and it pretty much blacked out the bluegray on the weapons.  I also noticed that the gold on the canopy was too thick - it had actually created "chunks" of paint on the panels.  Then I took a closer look at the Model Master Green bottle, and noticed one of the problems.  All the metal flake had settled to the bottom.  No wonder it had seemed so translucent!  I scraped the bottom of the bottle with a popsicle stick, shook the hell out of it, and then applied a single coat to a second VIPER.

It worked much better that time.  I finished that second VIPER using the same techniques as the infantry and 'Bots - bluegray weapons, gold (thinned this time) on the canopy, and Wonder Wash black over the whole model.

The difference isn't an effect of shadow or camera placement.  This is pretty close to how they each look in person.  Suffice it to say - the left VIPER is currently sitting in a bath of Simple Green cleaner and waiting to be stripped.  The second one, on the other hand, is a very good fit with the existing figures:

Not perfect, but good enough for my game table. And the best news?  Painting that second VIPER only took about 30 minutes.  I'll easily get the third one finished, and then order another set or two from Rebel Minis.  They are very nice mecha, and the price is just unbeatable!