I have a basement full of miniatures. Prominent is a collection of over 100 plastic Rogue Trader space marines. Many are STILL on the original sprues. I won a few auctions, and realized I had more than enough to finish my Dark Angels Battle Company, and would have plenty to spare. Around the same time, the Bell of Lost Souls announced they were starting the Badab War campaign book, I knew I'd have to try out one of the chapters.

I wanted to try a more complicated paint scheme than my Dark Angels, so for my traitor chapter, I chose the Executioners. I've never done camouflage except for Epic Imperial Guard, so I figured this would be a fun chance to do a full camo army.
Over the years, there have been many interpretations as to exactly what color scheme we saw in that original Rogue Trader-era article. The most common portrayal seemed to be white armor and blue camo on that, so I painted along those lines.

I decided, rather than assemble thousands of points and then ignore it for years, that I should actually build-paint-play at 500-point increments. My initial list: 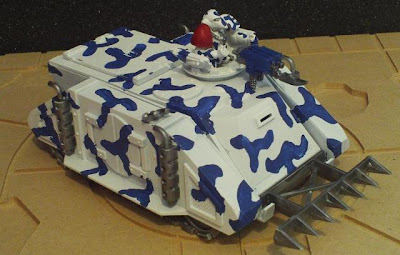 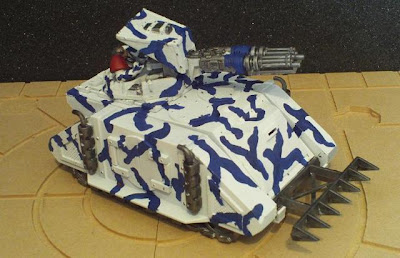 The Rhino and Razorback are the older body styles. The Rhino's Stormbolter is actually a modern Chaos combi-bolter, and the Razorback's assault cannons came from the Ravenwing sprue. The conversion was exceedingly simple. I added RTB01 torsos, heads, and arms to each, keeping the Mark VI theme consistent. 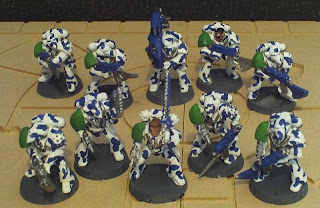 The tactical squads are straight assemblies from RTB01, with the exception of Berzerker chainswords and Azrael backpacks on the Sergeants. I have about a dozen of these backpacks... one of my last purchases before we lost the Bitz service.

The captain is a little different, as my original list called for him to have artificier armor. I used current Space Marine legs and torso front, the Captain back torso with cape, and the arms and head from a Khorne Berzerker (all icons shaved away). It makes for a sinister looking model, which I really like. Also, it's far less ornate than the current trend of Space Marine captains, which I feel is more appropriate for a Codex chapter.

At 500 points, a flamer would be more useful than a meltagun. That gives me five points to tweak my captain. I'm considering two options: replacing his chainaxe with a power axe (he was slaughtered by a Chaplain's power weapon during a game), or removing both arms and replacing them with lightning claws. 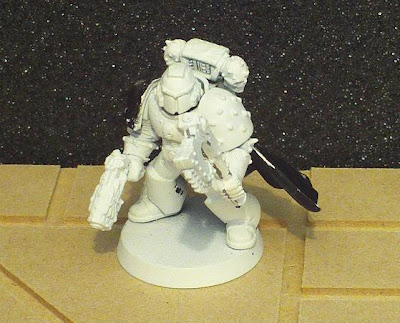 Or alternatively, I may remove him altogether and field a Librarian. Either way, he won't be painted until I make my final decision.

For decals, I intended to use the ones made by BigRed at BoLS, but after printing, decided I hated them. On a beakie marine, the axe faces the back, and I want them to appear as aggressive as possible. Also, the axe head resembles a fireman's tool rather than an executioner's blade. So until I take the time to create my own decals, they're going to stay "chapter free" for awhile.

For basing, I decided the blue-and-white camo was an effect of an icy homeworld. They will be snow-based, with blue slate chips and stones scattered on the leaders.

I'm experimenting with several options to increase to 1000 points. But with numerous other projects and very little free time, I'll probably wait and see what (if any) special rules or scenarios are in the final BoLS product, and build the army accordingly.

Kudos to the first reader identifying the base I used in the photographs!
Posted by Basement Gaming Bunker at 1:35 PM