Sorry it's been so quiet around here lately, folks. We have something big being announced soon, and it's taken a lot of our time to make those preparations. Stay tuned!

In the meantime, I'd like to post a review of Rebel Minis' excellent Scourge models, since I assembled and painted a few of them earlier this week. I picked up two packs of the Scourge Infantry and one pack of Scourge Heavy Weapons when Rebel Mike ran his December sale (along with a few other models - later posts!). I wanted to knock these out first so I could get a 15mm army ready to play.

The models themselves are excellent sculpts - some of the best I've seen so far in 15mm. These models have received some criticism for not being "skeletal" enough compared to offerings from Ground Zero or 15mm.co.uk, but I really like how "chunky" they are. As with most things in this scale, they aren't tied to any particular ruleset or sci-fi universe. They have more of a "battle android" appearance, but are easily able to be used as Terminators, Necrons, or anything else one could imagine (and I probably will). The sculpts themselves were very clean - they required almost no trimming or clipping before I was able to break out the primer. Variety is also good among both packs. There are five different infantry poses in the main pack, and two sculpts each of four different weapons in the heavy set. 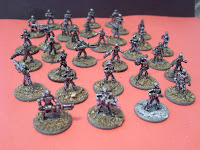 I selected 32 figures for my initial set. I based them individually on pennies for Forge of War, and can mount them on my movement trays to have eight units in Alien Squad Leader or Future War Commander. If I take the energy shield option, this gives me a 96-point Automaton starter force in ASQL.

Painting was extremely simple. I hit them with black Armory primer, dabbled the eyes with Blood Red, and gave them a Boltgun Metal drybrush, and a medium gray (cheap terrain paint) base. The next night I dipped them all in some sand I swiped from a local playground. My original intention was to give them a "gray ash" effect base, which you can see on one of these:

After completing one, I decided it was too monochromatic and boring. I dipped the rest, but didn't paint over the sand on the remaining models. I think I prefer the sandy bases, but I still have gray showing on the edges. I might hit the entire base with a Sepia wash to see if it helps. I'd also like to lightly drybrush the bodies with Mithril to lighten them up. I haven't decided if I want to paint the weapons a different color so they stand out, or just leave them as they are. But whatever I decide, they are good enough now for the tabletop. Now I just need something for them to invade...